Did you know this about Holly Hill?

solid roads; only mud, sand or dirt paths to travel on. The early methods were on foot,

mule, horse or by water. The photo on the right shows the Rio Vista road near the old 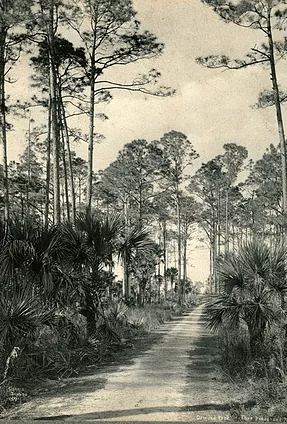 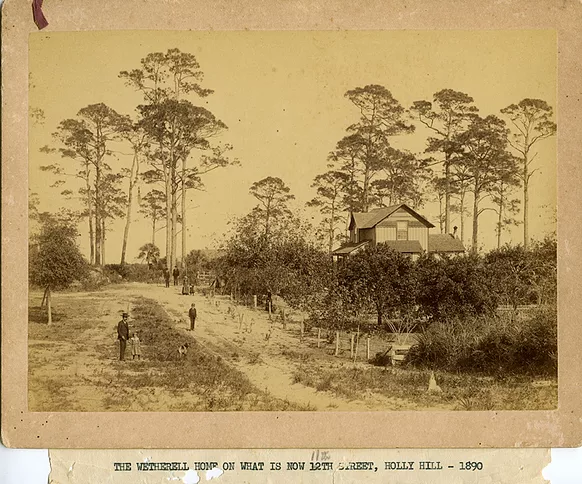 This picture on the right shows todays LPGA Blvd looking east to the river.

The Wetherell home is shown on the left. He built his brother Charles a home across the street from him which still stands today 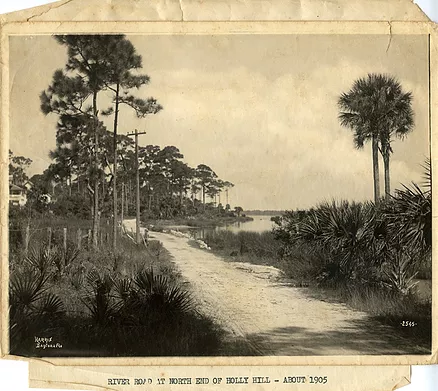 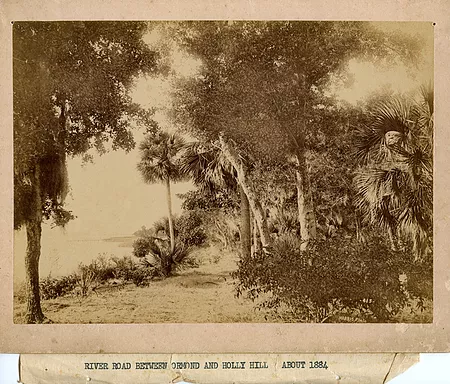 Work animals were a neccesity for early settlers. Horses, cows, chickens, mules and oxen were among those creatures we owe a great debt to. The early settlers used mules, an offspring of a male donkey and a female horse, to do land clearing, farming and for transportation. Oxen were used in the logging industry, the clearing of land as well farming. 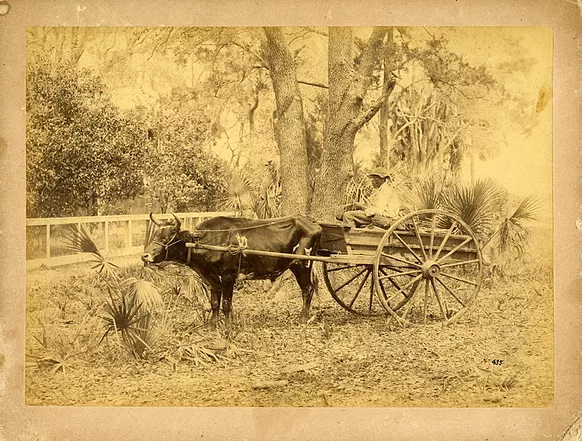 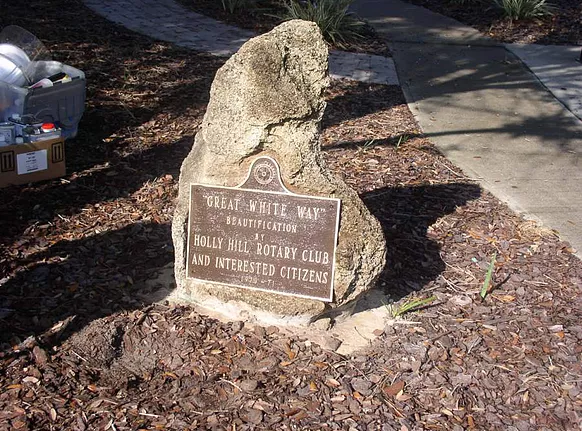 The Holly Hill HIstory Museum & Education Center has the City of Holly Hill's original handwritten minutes dating from its incorporation on July 1, 1901. These records provide many interesting historical facts and are being transcribed by museum volunteers. If you would like to help please contact the museum.

The history of the Great White Way goes back to 1924. That year E.F. Stearns and his wife moved to Holly Hill, with the intention of building a motel and diner. He obtained land in what is now the 500 block on the east side of  Ridgewood Ave. (US #1).  On this land stood the old Central Park Motor Court and the Carpet World Store. Mr. Janowski, who owned the only cabins in Holly Hill at that time, told Mr. Stearns " I'm sorry to see you putting up cabins above me as I'm starving to death here now." Well  Mr. Stearns paid him no mind and continued building his units, 25 in all,  along with a diner, the first restaurant in Holly Hill. The restaurant  became the gathering place for the  locals and a meeting place for politicians. When the politicians ask Mr. Stearns if they could put their picture on the diner wall,  Mr Stearns would answer,   “Go ahead, add it to the Rogues  Gallery “. Mr. Stearns displayed the first neon sign in the city of Holly Hill; thus the beginning of the " The White Way".   At that time Ridgewood Ave. was shaded with beautiful oak trees. When Mr Stearns got the first pay phone installed in Holly Hill, he wanted to have it listed  as Stearns Motel. The phone company said he would have to list it as Stearns Cabins or Court, for there was no listing for 'Motel'.  After insisting, he won. So his became the first listed 'Motel' in Holly Hill.  The bronze plaque marker was to honor the beautification of Holly Hill.  Dedicated to the community by the Holly Hill Rotary Club of Holly Hill in 1970-71.  The Holly Hill chapter of the Rotary is no longer in existence. The bronze plaque marker was recently restored by the Holly Hill Historic Preservation Society. The marker, shown at the right, is located next to the museum. We are searching for anyone who may have information related to the Holly Hill Rotary. We want to develop a record of its history and place it in our archives as a record that will be treasured in years to come. 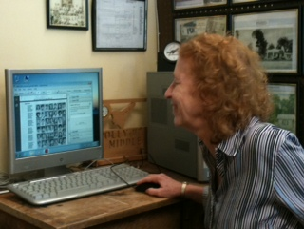 Come check them out!

Historian Ron Edwards, a founding member of the Holly Hill Historic Preservation Society, donated his lifelong collection of photos, books and articles to the Holly Hill History Museum. The archive contains not just Volusia County history but other subjects as well. If you would like to continue his work please volunteer or donate to the Ron Edwards Endowment Fund.

In the event the Museums General Fund become low the Endowment Fund shall be available to assist funding as long as the entire money that is borrowed is replaced back into the endowment fund. 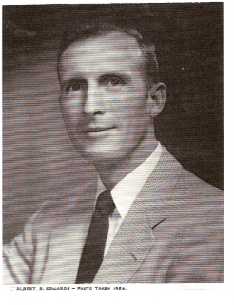 The history of a city can be attached to the names of its streets.  How many times do we drive past a street sign and wonder “why is it was named that”? The Holly Hill Historic Society and Museum is collecting this information along with names, photos and histories of our city developers. If you have any artifacts or information on this subject please contact the museum.

Drivers along US1 know Holly Hill streets mostly as numbers: 1st, 2nd, 3rd, but that was not always the case. These streets had names dating back to 1876. Sometime in the 1930’s these original street names were changed to numerical order most likely to speed up response for the police and volunteer fire departments.

The following are the original names for these streets:

You will notice that 13th Street does not exist.  Many consider the number of 13 to be bad luck. Many buildings do not list a 13th floor or ever a room #13. Because of this it was named after the Walker family who owned the subdivision property.

However former Holly Hill Mayor Marion “Mike” Walker (1933-37) would later be arrested and charged with nine felony warrants.  He was sentenced on two: for embezzlement of a total of $860 from the Daytona Finance Co.   On March 10, 1939 he was ordered confined to the Raiford State Prison for two years. So it seems that it still was unlucky for Mr. Walker.

William Samuel and Mary Fleming were residents of New Castle County, Delaware. The Fleming’s in 1876 owned most of the land now comprising Holly Hill and his land holdings continued from there south through Port Orange, where he and his wife Mary lived.  In 1877 he owned 4,000 acres on the Halifax River between Ormond and the recently settled site of Daytona and began to erect a simple frame dwelling on a portion of his riverfront property. Mr. Fleming began building a simple frame dwelling on a portion of his riverfront property. The land was cleared just south of the Holly Hill Canal right on the river shore.  Unfortunately he died on December 22, 1877 before construction was completed. In the summer of 1876 Fleming went to Philadelphia, which was preparing for the country’s centennial, with the express purpose of influencing settlers to come to Florida.  He got the promise of fifteen families.

A popular way of naming towns and streets at this time was naming them after the places the settlers were from.  The Flemings appropriated the name Holly Hill from their ancestral home in Ireland. The original street names were most likely named the same way. The Simcoe family was from Delaware. Mrs. Monroe wanted the city named after her home of Newport News but it was named Virginia Street instead. Flomich Avenue got two states combined: Florida and Michigan.

Many streets remained unpaved even into the 1950’s. A property exchange deal made with Volusia County enabled Holly Hill to get its streets paved as the city experienced extreme growth due to the end of WWII and the automobile highway system.  The subdivisions were now usually named by the developers of the property.

Mason & Carswell: In June 1882, Mary Fleming sold most of the southern portion of the Fitch grant to Benjamin and LaBelle Mason for $7,500 Several weeks later, the Masons conveyed a half interest in the property to Lockhart R. and Elmira Carswell of Chicago, Illinois, thereby initiating a long partnership known as Mason & Lockhart. The platting of these subdivisions in the 1880s provided a plan for development with some of the most concentrated collections of lots at the south end of the village adjacent to Daytona.

Having experienced some success with land sales, in 1884, Mason and Carswell opened a smaller subdivision which extended several blocks west of Ridgewood Avenue and north of Mason Avenue, creating still smaller lots as a plan for concentrations of commercial and residential buildings. By then, Holly Hill’s southernmost street had been named for Benjamin Mason, who served as the on-site manager of the properties with Lockhart conveying him power of attorney to handle legal transactions affecting the properties.  The connecting north to south industrial district street, Carswell Avenue, was named after Mr. Carswell.

Major streets were easy to name.

Riverside Drive ran along the shore of the Halifax River.

Ridgewood Avenue was a heavily wooded path located by a high ridge.

Center Avenue ran, end to end, through the center of town.

Nova Road, however, was simply called the Truck Route or Canal Road for 30 years before the late 1950’s. News-Journal editor Robert Hunter and Ted Brousseau owner of the Tomoka Oaks subdivision thought this name was not very attractive to prospective buyers for upscale developments. The space program was making headlines and bringing many jobs to the area. The Merritt Island Space Center had begun testing the Nova Series rocket in 1959. The men decided this would be a very popular name for the road. Surprisingly nobody objected and it as renamed easily.  Sadly NASA instead went with the follow-up Saturn Rocket but the Nova name continues.

Developers competed to draw in buyers during the explosion of growth in the area. One way was to tap into the exotic and tropical image of Florida, which appealed to northerners and tourist. This was a theme that continued throughout the explosion of developments in the area. Along 8th Street, starting with Grove Avenue appropriately, names such as Orange, Magnolia, Jasmine, Oleander, Palm, Hibiscus, Narcissus, and Gladiola sprouted.

Other names may have sounded exotic but had different origins. Off 8th Street between Center and Nova is a street named Acirema Drive.  It is not named after a Russian Czar or Indian Tribe. The clever name is actually “AMERICA” spelled backwards.

Sanrobar Drive off Riverside Drive and north of 10th Street was named after the developers children: Sandra, Robert and Barbra.

Scituate Lane is Indian for “cold brook”. The Timucua tribe was settled in this area north of Flomich Avenue as far back as 1562.

Cave Avenue, off LPGA and east of Center, is named after Vet Cave who operated the Cave Cigar Factory here and was the first Mayor of Holly Hill. It was at here that the city of Holly Hill was created by its citizens on July 1, 1901.

Increased needs for housing prompted the construction of new dwellings Holly Hill. The population of the city doubled from 1940 to 1950. Between 1960 and 1980 it doubled again to 9,953. Some of the developments still maintain streets named from them.  Among the many development subdivisions were:

Clifton Park in 1950, located between 6th and 3rd Streets and from Center to Daytona Avenues was developed by Cliff Card.

Pleasant View on each side of Florida Avenue North of 6th Street.

Pine Crest was between Carswell and State.

Avondale Park between US1 and Daytona Avenue north of 9th Street.

Palm Park at Carswell and State Avenues between 8th and 10th.

Sherville Park at Fern St between Center and Orange Ave.

Norman Lear at corner of Daytona and Flomich.

Dakota Park was started by Louis Unatin in 1957 at Flamingo Drives.

Lillie Lane is named for Lillie Barbour in the Barbour subdivision at 3rd and Center.

South of LPGA and east of Center Avenue was Wellworth Village formed in 1947. Former Holly Hill Mayor Tom Renew named the Drives after his children: Stuwart, Martha, Howard and William. When Bill Worthington later added a street to the subdivision he decided the Mayor should have a street named after him too and called it Thomas Drive.

On the west side of Center Avenue, off 10th Street is the Cherokee Ranch Estates by Trask Builders. It was developed in the late 1950’s and early 1960’s.The owner was Native American Indian and that is why the streets are aptly named Indian Oaks, Cherokee Ranch Road and Chippewa Trail.

Thank you to our sponsors for their support!